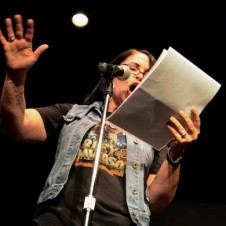 Get ready. A fierce spat of dueling words is coming to Oakland, California, for the first time ever and the city will never be the same.

It’s been 25 years since the National Poetry Slam! started across the bay in San Francisco and the poetry competition hasn’t been back to the bay since the 1990s.

Next month, the slam competition returns home for its silver anniversary and for the first time to Oakland.

An estimated 500 poets representing a record number of 72 slam teams from across the United States and Canada — seven from the Bay Area — will verbally battle it out for five days, August 5 – 9, in front of thousands of fans for the National Poetry Slam! trophy. More >