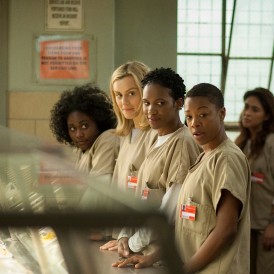 I am always trying to crowbar a queer feminist reading into every morsel of popular culture I consume. Imagine my surprise when I decided to turn my lens on new Netflix series “Orange is the New Black”, only to find that my trusty crowbar was no good here.  There are many reasons I feel that way: Not only is the show populated by women, it is also about women. Never has a show passed the Bechdel Test with such monumental flying colors. The only other example that comes to mind, Showtime’s “The L Word,” mainly passes on a technicality – there are very few men in the lesbian utopia that is fictionalized gay LA. What’s interesting about OITNB is that there are many male characters and many women who like men. However, the majority of conversations between these women are focused on their identities, their hopes, their fears and, most significantly, their relationships. The show puts female camaraderie at front and center, which is refreshing and, hopefully, precedent setting.

To say that the show contains a lot of diversity is a laughable understatement up there with “Ellen is funny” and “Portia is beautiful.” Television has come a long way (at least on cable) in terms of diversity, with Showtime’s “Homeland” featuring a woman with a mental health condition as its extremely competent protagonist and HBO’s “True Blood” consistently making sure at least three persons of color are in the main cast of every season. OITNB, however, takes diversity to a new level. Its large ensemble cast has a varied list of ethnic and cultural backgrounds, reminding us that there are many different manifestations of “black”, “white” or “Hispanic”, as well as a number of sexually fluid and queer characters, similarly diverse in their representation. It is also the first high profile show to feature a trans woman played by an actual trans woman, a milestone that feels woefully overdue. Not to mention the show’s reflection of every different economical background imaginable.