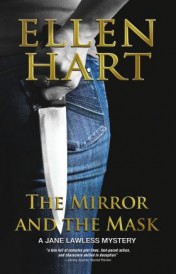 Bywater Books has done a good thing. They just published two Ellen Hart books, bringing them home to the lesbian literature world. Hart has written twenty eight crime novels, in two series, published in the mainstream (read: straight) world. She has received more accolades than any other writer of lesbian fiction, including five Lambda Literary awards. Yet her works remain under-read in the LGBT community. Hopefully, having two of her books from the Jane Lawless series published by a lesbian press will garner the readership Ms. Hart should, in my opinion, receive from our community.

The Mirror and the Mask

Jane, owner of two restaurants and about to open a third, seems restless and bored. A recent breakup can do that to you. Drunk-calling her ex is not good. So when Annie Archer falls into her life, seeking part-time work and help finding her long lost father, the chance for distraction is just what Jane needs.

Annie is not as honest as she at first seems. Jane discovers discrepancies rather early, but continues to help Annie, unravel the story around her father… and before you know it, someone winds up dead. It looks like an accident, but autopsy and forensics define it as murder.

Nothing is what it seems to be in this most subtle of character driven mysteries. It is a product of great writing that the reader can make a case for each of the suspects, and never really knows for certain what happened. The denouement, full of action with guns and kidnapping going on, leaves you almost sure we have the whole story. The characterizations are what makes this tale of crime, assumed identities and unclear motives work. Is Annie a good witch or a bad witch? Which one of the suspects, each of whom has motive, really had the guts to go through with murder? 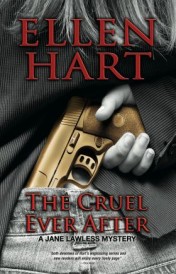 The Cruel Ever After

Jane Lawless, restauranteur and sometime private investigator, full time lesbian, is shocked when her ex-husband Chester shows up in Minneapolis. Yes, to the great surprise of everyone who knows her, Jane was once married, briefly, to a man. In a scheme to get his inheritance, Chester and Jane agreed to a marriage of convenience, which left Jane with a payment for her service large enough to start her first restaurant. Chester left town with his fortune, and Jane received divorce papers in the mail.

Chester is a man of schemes and fortunes lost and won. His reappearance coincides with his latest deal to sell stolen artifacts from the Baghdad museum to get back on his feet and build another fortune. The problem is the dead body he woke up with. When a second dead body turns up, he is arrested for murder. Chester turns to Jane to get him out of jail and clear his name.

Who is behind the killing of anyone who gets involved with the stolen art?

Remember The Maltese Falcon? The book, not the movie. One of the first “hard-boiled” mysteries, written by Dashiell Hammett, with the private dick Sam Spade. “The Cruel Ever After” pays homage to the great book and to the genre itself. This is a tail-chasing, fast paced whodunnit of the first order.

These two books by Ellen Hart should get you hooked on her writing, which is delightful, and on the Jane Lawless series too. There are twenty of them. Ellen Hart is a little known treasure, much like the the bull stolen from the museum, now come home to us. Hart is prolific, she is tireless in spreading the word about lesbian literature as she makes frequent appearances at libraries, and she is good. She has done her due diligence in making inroads into the mainstream. You will not find characters more deftly and finely drawn than in “The Mirror and the Mask.” You will be on the edge of your seat with all the twists and turns in “The Cruel Ever After.” Do yourself a favor and get both at once, enjoy, and do a good thing by helping make Ellen Hart’s work as well known and loved as it deserves to be within the pantheon of lesbian literature.

Bett Norris is the author of “Miss McGhee,” and “What’s Best for Jane.”