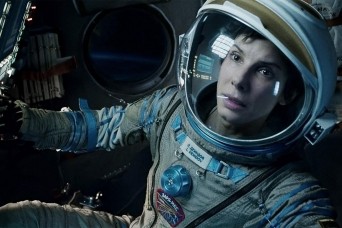 In Alfonso Cuarón’s “Gravity,” we join tenured astronaut Matt Kowalski, played by George Clooney, and Dr. Ryan Stone (Sandra Bullock) in outer space. I’ll be the first to admit that I was slightly skeptical about seeing this film. I was afraid this highly talked about film was going to end up being a modern rendition of Kubrick’s “2001: Space Odyssey.”

Being accustomed to the science fiction space films of my generation such as “Star Trek,” “Star Wars” and “Alien,” I was very curious to see how Cuarón was going to pull off having his minimal cast just “being” in space together without any epic battles or alien contact.

Alfonso Cuarón’s signature long takes are as brilliant as ever in this cutting edge cinematic masterpiece. Twenty minutes into the film the cinematography successfully infiltrated my brain with massive anxiety. From the moment the mission went bad I started thinking “oh my god why would they let her (Bullock) in space. They should’ve picked someone more experienced!” My head was turning without actually moving. I was fully captivated. And then all of the sudden, just when I thought another level of anxiety could not be introduced, it’s “bye, bye” Matt Kowalski and hello lonely space for Dr. Ryan Stone.

With space junk flying at my face courtesy of the 3D technology I started to sense that Bullock’s character was completely drained and has lost hope. Slowly we see her shut down the oxygen in the capsule in which she is contained. Then, just as she is on the verge of asphyxiation, Clooney reappears to remind her of one last option she’d not yet attempted. The only catch is Kowalski’s still dead, or is he?

“Gravity” is definitely a film worth catching on the big screen. The experience of watching it reminded me of my childhood days when I would ride the Gravitron amusement ride every year at the town fair. Lucky for me unlike most rides on the Gravitron the movie theater didn’t have any projectile vomiting.

“Gravity” is available on DVD/Blu-ray, on demand and in theaters.