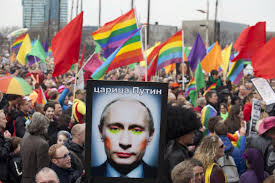 A photo of Russian President Vladimir Putin in makeup, at a rally in Amsterdam (Photo: Reuters)

Four Dutch tourists have been jailed under Russia’s “gay propaganda” law after they were suspected of promoting homosexuality to children. According to a Huffington Post translation, the tourists arrived in Murmansk in mid-July to make a film about the city and the life of gay community there. While conducting a seminar with local LGBT group Center Maximum on Sunday, the police came in and arrested group chairman Kris van der Veen, as well as a camerawoman, a sound technician and a female student. Members of Center Maximum were also arrested.

The police were reportedly looking for minors at the meeting, according to Gazeta, but found none. They did, however, discover a 17-year-old in the film footage. The teen had told the crew he was 18 years old at the time of his interview, according to the report. Police were able to keep the Dutch tourists under the “homosexual propaganda” law.

One Response to “Dutch tourists jailed for ‘homosexual propaganda’ in Russia”