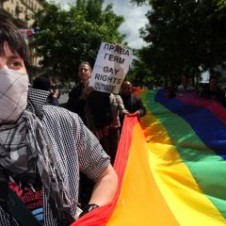 Against the backdrop of growing concern over anti-LGBT discrimination and violence in Russia, Russian President Vladimir Putin on Sunday signed a bill into law that bans the “promotion of homosexuality” to minors. Police in St. Petersburg on Saturday arrested 40 LGBT advocates and a handful of the estimated 200 nationalists who challenged them during a gay rights rally. Authorities on May 24 arrested Alekseev and 29 other gay activists who tried to stage a Pride celebration outside Moscow City Hall.