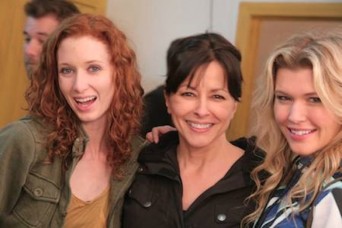 Writer/director Marina Rice Bader makes her directorial debut at the 32nd Annual Outfest Los Angeles LGBT Film Festival with the world premiere of her feature film entitled “Anatomy of a Love Seen.” Previously, she was the executive producer of “Elena Undone” and “Perfect Ending.”

Bader’s lesbian-themed feature film screens Friday, July 18, 2014, at 7pm at THE DGA 1, located in The Directors Guild of America in West Hollywood, California. The premiere will be followed by an exclusive cocktail reception after-party with the entire cast and crew.

As the driving force behind Soul Kiss Films, Bader’s independent film company, her mind and artistic direction is only focused on one goal: Creating evocative, entertaining and compelling movies by women, for women and about women. And she’s already successfully planting the seeds to do just that with “Anatomy of a Love Seen” and the upcoming “Raven’s Touch.”

“Anatomy of a Love Seen” stars Hollywood newcomers Sharon Hinnendael, Jill Evyn and Constance Brenneman. This film within a film explores love in all its painful and messy glory. The story takes us back six months, when actresses Zoe (Sharon Hinnendael) and Mal (Jill Evyn) fell for each other at exactly the same moment in time while filming a love scene. After five blissful months together Zoe was decimated when Mal walked away. Three miserable weeks later a very lucrativenetwork broadcast deal was in the works. They only had one request: Re-shoot the love scene. Welcome to the set.

Shot in five days, this improvised film based on Bader’s story, characters and outline fulfilled her desire to create a very organic and visceral experience.

“Anatomy of a Love Seen” was made on a small budget, but that hasn’t stopped a huge online buzz.

Released just a few weeks ago, the trailer for the film is making a lot of noise having already garnered well over 125,000 views.

Bringing a unique passion to her craft and desire to make her mark, Marina Rice Bader is one talented filmmaker to keep an eye on.