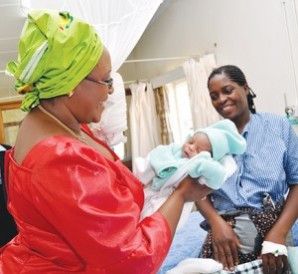 Three men are currently awaiting trial, facing up to fourteen years in prison, for violating Zambia’s anti-gay laws. But in the midst of hate emerged the country’s First Lady, Doctor Christine Kaseba-Sata, to send a message of peace. “No one should be discriminated against on the basis of their sexual orientation,” Doctor Christine Kaseba-Sata said during a UNAIDS reception in Lasaka, the country’s capital. “Rather, we should address reproductive health issues around this issue.”

LGBT activists in the southern African country are calling the First Lady’s words a “miracle” and “potential game-changer.” Legislation is incredibly intolerant to LGBT citizens, and it seems the people of Zambia feel the same. In 1999, a non-government associated organization called Zambia Against People with Abnormal Sexual Acts (ZAPASA) was created to eliminate homosexuality, and according to LGBT asylum news, a 2010 survey found that just 2 percent of Zambia’s population believes homosexuality is “morally acceptable.”