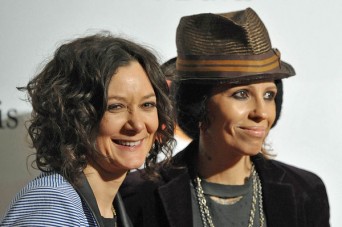 Actress and “The Talk” co-host Sara Gilbert revealed recently that she realized she was gay while dating “The Big Bang Theory” star Johnny Galecki. Gilbert made the emotional confession about her sexuality Thursday as part of secret-spilling week on “The Talk,” People magazine noted. She began by describing how she dated Galecki as a teenager back in the 1990s while filming “Roseanne.”

After the two had split up, the actress began dating a woman, 18 years her senior, who was also in the public eye. She didn’t want it to get out, for fear it would damage her career, and Galecki kept it a secret. Even up until recently, when she got engaged to musician Linda Perry in April, the 38-year-old continued to worry about what these personal revelations could mean.