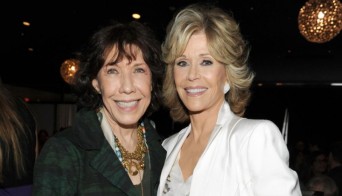 “9 to 5” costars Lily Tomlin and Jane Fonda are teaming up for a new Netflix sitcom, “Grace and Frankie.” The 13-episode, single camera sitcom will feature the veteran actresses as rivals who are grow closer after their husbands declare their love for each other and reveal their plans to marry.

Written and created by Marta Kauffman (“Friends”) and Howard J. Morris (“Sullivan and Son”) will premiere on Netflix in 2015.

“Jane Fonda and Lily Tomlin are among the funniest and most formidable actresses ever and it’s an incredible privilege to give them the opportunity to run riot on Netflix,” said Netflix’s Ted Sarandos via media announcement. “The show created for them by Marta and Howard is warm, very funny and anything but wholesome. We can’t wait.”