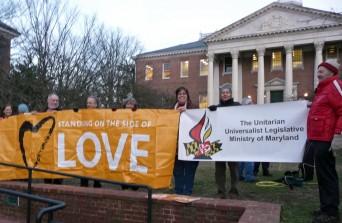 “I think we’re looking pretty strong, but the other side has yet to put on their onslaught of commercials and fear and division,” Maryland Governor Martin O’Malley told HuffPost Gay Voices at a star-studded New York fundraiser for the cause of marriage equality in Maryland, where a marriage equality bill the governor signed goes to the voters this fall. “Right now in the polling we’re running about 53% and those that are opposed to marriage equality in Maryland are at around 38, 39 percent. So we need to shore that up and push the truth that no child’s home should be denied equal protection under the law.”

O’Malley joined comedian Sandra Bernhard, Susan Sarandon, Josh Charles of “The Good Wife,” Ed Norton, and filmmaker John Waters, as well as George W. Bush’s daughter Barbara and former Bush campaign manager and one-time RNC chair Ken Mehlman, on the rooftop of The James hotel in Soho, where attendees paid anywhere from $250 to $25,000 to help the cause of equality and mingle with the celebrity supporters. Maryland was seen just a few months ago as a tough state to win marriage equality at the ballot, where it has lost in over 30 states previously. But President Obama announcing his support for marriage equality appears to have changed the equation, and the fundraiser itself was evidence of that, as supporters realize they now have a good shot but need to raise money.