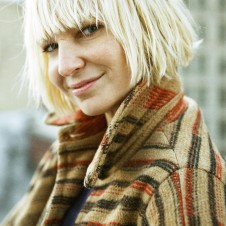 Sia Furler first came to mainstream prominence with “Breath Me,” the haunting song playing in the closing moments of Six Feet Under. The Australian singer-songwriter has been openly bisexual throughout her career—and even dated Le Tigre’s JD Samson for some  time—so fans queer were understandably shocked to learn Sia had collaborated with Eminem on “Beautiful Pain,” a song on his new album, “The Marshal Mathers LP 2.” We usually think of Twitter as a place for celebs to spew ill-conceived platitudes, but Sia seems convinced Slim Shady is just an invective-spewing character adopted by Marshal Mathers—”I know personally that he is not homophobic, but a performance artist.” but also appears genuinely concerned and perhaps even remorseful about getting involved with him. “I feel powerless… what’s done is done.”