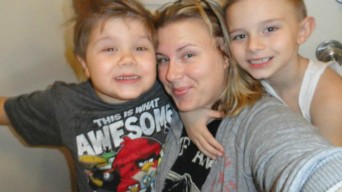 Alicia Hardesty’s fiancé, Ashley, with her boys, Joshua and Nicolas

Former “Project Runway” Season 10 star Alicia Hardesty is fighting for more than the title of top designer these days. She and her fiancé, Ashley, are locked in a custody battle for Ashley’s two sons, Joshua, 7, and Nicolas, 8, and have launched a GoFundMe campaign to assist with legal costs.

The typically private Original Tomboy founder/designer shared the couple’s three-year love story with the world, along with the tale of their alarming, though all too familiar, custody battle with Ashley’s ex-husband.

“When he found out about Ashley’s involvement with me, he wasn’t mentally prepared for the mother of his kids to be in a relationship with a woman. He proceeded to stalk my online social media accounts and threaten me through emails and voicemail — this is someone I’ve never seen or spoken with,” Hardesty explained on her GoFundMe page. “He went after members of both of our families, some of my closest colleagues, in an attempt to drive us apart. Ashley’s family was harassed, all while trying to understand her new found love for a woman. He wanted to make Ashley think she had no one, and that she would have to choose between me and her two precious boys that meant the world to her. His tactics didn’t work; they only brought us closer together, and now we find ourselves in a position where we’re fighting to be the family we want so desperately to be.”

The pair retained Christy L. Ho, Esq., an LGBT-friendly, Honolulu-based attorney specializing in civil litigation to represent them in the case. Ashley’s husband currently has the boys in Hawaii, refusing to allow them to even speak with their mother.

Ho recommended that Alicia and Ashley move either to Hawaii or Texas (where the boys are originally from) to wage the fight for “a fair and joint agreement” in the case and the couple has relocated to Texas as a result.

The absence of a Safe Child Act in Hawaii makes the battle all the more difficult.

“In Hawaii, they have weird laws about kids under a certain age; they can’t leave the island without both parents approval,” said Hardesty in an interview with Edge on the Net. “She doesn’t have visitation, and hasn’t talked to her kids in a month. She wants visitation to be equal at least. And he doesn’t take responsibility as parent to connect them with her.”

Hardesty is hoping to raise $10,000 with the GoFundMe campaign. All funds will go toward legal expenses, with any excess being used to cover travel costs to reunite Joshua and Nicolas with their mother.