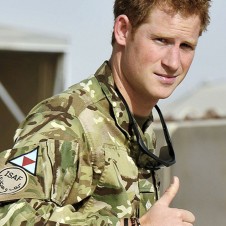 Prince Harry has made a few royal mistakes (remember the naked girl he took pictures with in Las Vegas? Or when he admitted to underage drinking and smoking pot at 17 and got sent to a drug treatment center? Or the time he wore a Nazi uniform complete with a red swastika armband at a fancy dress party in 2006?). However, when a solider is in trouble on behalf of his sexuality, Prince Harry is more than willing to step up to the plate.

According to Lance Corporal James Wharton’s new memoir, Out in the Army, Prince Harry helped him when Wharton’s started receiving death threats due to his sexuality fellow soldiers in 2008.