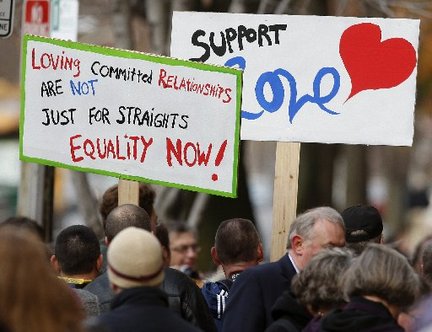 A New Jersey court ruled on Friday in favor of marriage equality on the basis that the state’s current system of civil unions precludes gay couples from receiving the federal benefits of marriage. In the 53-page decision, Judge Mary Jacobson of the New Jersey Superior Court grants summary judgment in favor of plaintiffs, saying same-sex couples must be able to marry under the equal protection guarantee provided under the state constitution. The ruling cites Lewis v. Harris, an earlier decision that led to the creation of civil unions in New Jersey to bring equality to gay couples.

If the state doesn’t appeal the ruling, the decision states New Jersey has until Oct. 21 to start distributing marriage licenses to gay couples.But according to the Associated Press, Michael Drewniak, a Christie spokesperson, suggested on Friday the governor intends to appeal the ruling to the New Jersey Supreme Court.