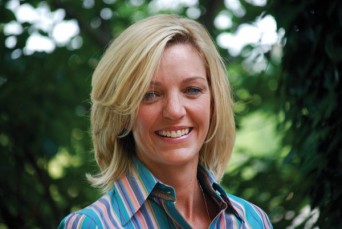 We know Kelli Carpenter because of her relationship with celebrity powerhouse Rosie O’Donnell, but there is more to the whip-smart blonde than all the star-centric media coverage would have us believe. In the late 1990s, Carpenter was a welcome addition to the lesbian limelight when our eyes were glued to the tabloids for news of Ellen, k.d. and Melissa, but she has always had her own unique story. Now, for the first time, Carpenter tells that story, and lets us in on what she’s been doing since the 2007 separation from the woman who made her famous.

Kelli Carpenter appeared on our radar in the heyday of lesbian chic, at a time when we looked at a handful of famous lesbians as test cases for our own acceptance: If this select group of women could come out on TV, get married, be invited to the White House, have children, then perhaps we, too, would find happiness. Because if they couldn’t, how could we? As it turns out, Carpenter did find happiness, then heartbreak and eventually happiness again—just like the rest of us. Along the way, she has reconnected with her roots and learned to touch her own life again. This self-described Ragin’ Cajun from Baton Rouge, La., is currently residing in New York and devoting her energies to her fiancée, the four kids she shares custody of with O’Donnell, and her business, R Family Vacations.

One Response to “Kelli Carpenter on family, business and finding love again”