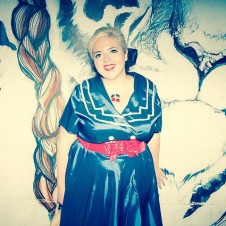 A few months ago my dear friend Fannon was visiting town and we were out at a dance party. Searching for a better DJ, we decided to bounce to a different party in Bushwick. I agreed to go if I was assured a ride home because Bushwick is far. Because a car was involved we managed to get a couple of passengers, one of which was talking at length about wanting to hook up with a babe. “No problem, I’ve got you covered,” said Fannon and was totally ready to get on the dance floor and help out this person she’d never met before.

The person found someone they were interested in and Fannon was ready to do the work of a good Wing Man and then the person chickened out. I was so disheartened for them–to find interest in someone but to be too afraid to use the resources that fate (or maybe the Goddess if you want to get spiritual) had put in front of them seemed like such a missed opportunity. Just because of fear! This was a great opportunity for the Nobody Ever Died of Awkward pep talk but to no avail, this person was stuck in their fear place. Me and Fannon (left) and Nicky (right).

Fannon and I had a great time anyway and a long conversation on the ride home about how to make the most effective use of a Wing Man. Fannon holds herself out to be a powerhouse Wing Man and I thought those tips might be a great resource for my readers who might be a little too shy to snare someone on their own. Or for readers who want to become better Wing People!

In this piece I’m using the term “Wing Man” as it is in the popular parlance, but I come to it from the perspective that all genders are magical and this term could easily be Wing Woman, Wing Wym, Wing Person, Wing GenderNonConformingIndividual, etc…

It’s also important to say up front this isn’t about tricking people or not being genuine. It’s about using your friends to help you get through social anxiety (that many more people have than you think) and your friends helping you be your best, most vibrant self in the face of the inevitable nerves when you’re around someone you find attractive!

Fannon says, “Girls are rarely at bars alone, right? So sometimes the wingman just needs to distract the friends of the girl your friend is focused on so she can introduce herself without her friends acting as obstacles. This usually only works when your friend who you are wingmanning for is confident in her ability to introduce herself without getting all tounge-tied.”

I’ve also used this where your friend goes over and brings people back to you if you’re hanging out at different tables at the bar. It’s definitely a lot less intimidating to go up to a group where you’re not really attracted to anyone. The rejection stings less on a Wing Person with nothing on the line!

Wing People could use the line, “I was hoping I could introduce you to my friend,” and that’s a great way to pique interest and merge the herds so that your friend can get to know their desired person.

It’s soooo cheesy but sometimes it really works to have a Wing Man tell someone you think they’re hot. It really takes the sting out of rejection when someone rejects you to your friend. At least your embarrassment isn’t visible to the object of desire.

Sometimes your friends do this nonconsensually before you even have the chance to ask and in that case maybe it’s more of a casual yenta than a Wing Person but it helps! You can also get all the dirt you need. For me it’s whether the person is available, into femmes and into fat girls. I know if I have those three covered it’s basically whether the chemistry is compatible.

A good friend of mine (who is a complete and total hottie) was complaining this summer that three people in a week’s time came up to her and said their friend thought she was hot. She responded to each that she was flattered and that their friend should approach her. Yet NONE of them did! It is super important to totally follow-up on the diligent work of your Wing Person! My friend is both a babe and approachable, and getting past that next-level shyness might have actually gotten one of those friends a make-out.

Fannon mentioned making sure that you point out your friend accurately, lest you point to someone and they think you’re talking about someone else! This actually happened to me once a few years ago where my friend approached this hot fat butch I was into and said her friend was into them and they looked (seemingly at me) and said, “Oh, I’m not feeling it.” And then the hot fat butch asked me on a date a year later. When I asked what was up about that they said they thought she was pointing to someone else!

I’m also intentionally using the term “available” rather than “single” because people can be available (hello, polyamory/nonmonogamy) and people can be single and not available (for example, a period of chosen celibacy).

Pep Talks on the Go

I use Wing Men all the time. I don’t seem like on the outside it but inside I am wildly awkward around people I find attractive. Especially if I’ve got a full-blown crush, I feel like a mess. The single best thing my Wing Besties do for me is to provide pep talks and remind me that I’m a babe. You can totally use Wing People that aren’t even at a venue with you if you’ve got your phone and they are on text alert. I’ve even called friends right before a date just to get reminded that everything is okay.

I’m also a big fan of the social security blanket I get when I’m around people I am comfortable with. I feel much better stepping into my fierceness. I know this may seem weird because I get up on stage in front of thousands of people and am completely at home. But stage presence is a lot different than cold calling strangers one on one! I’m doing a thing now where I get Wing Men to go with me to professional networking events because it helps me feel more vibrant.

So just letting your Wing Folks know that you might need a pep talk is a great idea before you go out cruising, or asking for that help when you need it before you approach someone.

There’s a new app coming out in November called Wing Ma’am. It’s basically the queer grindr. Using GPS technology, people turn it on and it shows who is out cruising nearby. One of my BFFs met his boyfriend on Grindr so I have some high hopes for how this will work in the queer community. Imagine going to a bar and whipping out your phone and knowing in a few clickies which hotties at the bar are available and what they’re looking for? It’s like having your Wing Man do the work of finding out whether the hottie is single at the click of a button. But in order for it to work friends have to get their friends on it and get it to spread. You can sign up for more information on their website. The developers are also really open to conversations about aspects of it, here’s a link to their contact form. I’ve definitely been talking to them about making it more broadly gendered and using inclusive language.

The app is also going to have event listings and whatnot, so it will be completely relevant as a community building tool even for non-available folks!

I am a huge fan of using Wing Men to tag and release. If I am talking to someone hot and I have to run off (as a party promoter this is pretty common because I need to do rounds, pay out my performers/staff or handle some kind of issue) I really love introducing the object of my desire to one of my Wing Femmes and having them keep them entertained. Number one, this is a great way to get dirt on them that you’ll hear later, number two it also, selfishly, keeps them occupied so other people won’t get to them! Yeah, yeah, the more the merrier but sometimes you want to put your name on a cupcake you’ve only gotten to have one bite of before someone swoops in to eat the rest!

I’m a lucky Femme that is surrounded by attractive people of all genders and presentations. This often means in heteronormy ways that people assume my masculine of center friends are my dates which is totally not true. (I’m 100% available right now, BTW.) If you’re Wing Manning it up for someone make sure to drop the “My friend” dripping with emphasis on buddy or whatever you need to do to ensure that the object of lust is aware y’all are just platonic.

ORRRR if you’re polymeowmeow, it is super important if you’re flirting with someone (or flirting on behalf) that the person understands your availability. I often assume if someone tells me three times about their polyamory that they are flirting with me and this is about 75% accurate.

Fannon suggests this gem for the Wing Man. “Pretend it’s your friend’s birthday which gives the all points permission to ask someone out or tell them they are cute. If they hit it off and start dating, your friend just turns it into a ‘I didn’t know how to approach you and thought that would make it easier,’ which hopefully gets an “Awwwww, that’s so cute you needed a wing man” response.” While I’m not the biggest fan of lying to get people’s attention, this is cute and vaguely harmless.

Fannon also mentioned a great pick-up line (which only works if the person is available, you don’t want to anger someone’s girlfriend accidentally). “Encourage your friend to use the virtually fail-proof ‘Hey, I’ve never done this before but I think you are really cute, wanna make out?’”

Sometimes a Wing Man is good for eavesdropping to find out more information. I think the approach of actually meeting the person is a little more effective, but if you’re not ready to even make that move sometimes having your buddy just stand nearby to get a sense for what the group is doing at the event is helpful. Maybe there are common interests you could spring a conversation from?

I hope this lighthearted list of ways to use your Wing People helps out folks who might be a little too shy to talk to strangers at events! Also, before you go out there refresh yourself with some ways to broach the subject of crossing the friend line I wrote about in Just Text Them.