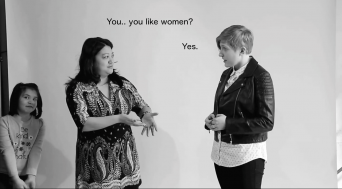 The Wren Studio’s “First Kiss” video that went viral last week has inspired numerous parodies.  Among the most entertaining is “First Gay Hug (A Homophobic Experiment)” produced by The Gay Women Channel.

Borrowing from “First Kiss'” premise which required 20 supposed strangers to pair up and kiss for the first time,  “First Gay Hug” pairs homophobes with a gay man or lesbian to receive their first gay hug.

It’s unclear if the video captures an actual social experiment involving strangers or was staged, as was “First Kiss,” but it’s entertaining nonetheless and touches on several of the stereotypes about gay men and lesbians.

What do you think of the parody? Be sure to “Leave a Reply” below.