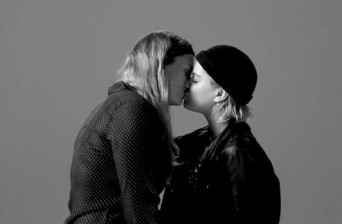 Everyone knows that a first kiss can be awkward. But imagine how awkward that kiss might be if the person on the other end of the lip lock was a complete stranger.

Tatia Pilieva perfectly captures that discomfort in her short film “First Kiss” in which she paired 20 strangers, instructed them to kiss and set the cameras rolling.

The ten pairs of smoochers include two same-sex couples, one gay male and one lesbian, and several heterosexual duos. In the film, participants engage in self-conscious introductions before the initial discomfort gives way to varying degrees of desire.

The film was created as part of an advertising campaign for Wren studio, a Los Angeles-based womenswear brand, and has garnered over 30 million views since its March 10 release.