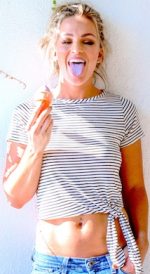 Baxter broke ground and made history being the first openly lesbian contestant on the iconic game show LOVE CONNECTION airing on Fox. The show was re-booted last summer with Andy Cohen and featured Liz searching for love in the LA lesbian scene. Liz’s personal experience and interest in film-making inspired the short film “Female Connection.”

Baxter who solely funded the short, was inspired by a similar personal experience.

Liz, an out lesbian, and Kylie (played by Tennile Goosic), a questioning heterosexual, are neighbors. When they first meet, there is an undeniable attraction between them. Their chemistry is immediately apparent even to Kylie’s boyfriend Matt. The two girls fall in love and Matt is soon out of the picture. But despite all their passion, Kylie continually pulls away, fighting the reality that she is in love with a woman. In the end, Kylie’s fear of disappointing her family is too great and she leaves Liz. Now, she must live with heartache of true love lost.

Directed by Adrienne Levy and written by Baxter, “Female Connection” exposes the idea that when you give into fear, all is lost. The track “Stay a Little Longer” by Lost Boy Crow carries the entire short film adding palpable emotions in showing the heartbreak on both sides of the story.

Liz Baxter wanted to create something that showed a different angle to the typical “straight girl falls for gay girl” story.

The trailblazing Indianapolis native wants to change mentalities when it comes to visibility. Her hope is that this short film is just one more piece of relatable LGBTQ content out there that might reach someone who needs to feel understood.

1. Do you have any phobias? (please enumerate with embarrassing details)
I have a phobia of accidentally yelling out something loud and inappropriate during a quiet moment in a crowded room. Sometimes it’s a work setting, funeral, comedy show, or other entertainment setting. I will think “what would happen if I just yelled out XYZ (insert random or inappropriate and childish comment)?” And I always feel a slight urge to do it!! Haha…I am not sure if this is an actual phobia or if I am just an odd one. Or both. 😉

2. What song can you not get enough of right now?
“Breathe” by Jax Jones and Ina Wrolsen. Go to spotify now…you’re welcome. 🙂 I tend to like upbeat/dance music. The kind you can car dance to in traffic (I spend a lot of time in the car). I am not one to sing along but I will definitely dance.

3. Which celebrity would render you totally star struck if you were to meet him/her?
Kate McKinnon – I have a legit crush on her. I feel like I could hold it together and act like a normal human around most celebs, but I used to think that one day I could actually date Kate. I think I would be afraid that she would KNOW and I would be so embarrassed. Awkward times.

4. What would be your best piece of relationship advice?
Just because you don’t understand why your partner feels a certain way doesn’t mean that it isn’t ok or valid for them to feel that way. They still need your kindness even if you are frustrated because you don’t “get it.” Sometimes you won’t “get it” because one scenario can be two totally different experiences for each person. We all could work on being more gentle in relationships I think.

5. If you could wake up tomorrow with one talent or skill you don’t presently have, what would you want that to be?
I would be able to speak every language fluently! Can you imagine being able to go anywhere in the world and be able to communicate with the locals and experience the culture?! I love traveling so this would be a dream! Also, talk about a resume builder and job security!

More Beautiful for Having Been Broken Watch now!