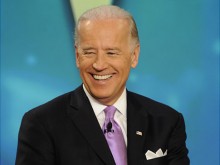 Vice President Joe Biden hailed the lesbian, gay, bisexual and transgender (LGBT) community as “freeing the soul of the American people” during his weekend visit to Provincetown, Mass.

Not surprisingly, LGBT issues were the focus of Biden’s fundraising campaign speech at Pilgrim Monument and Museum in Provincetown, which is internationally known for its gay residents and vacationers, Politico reports.