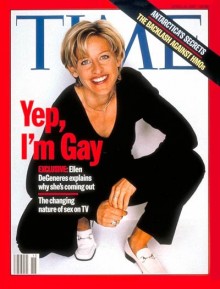 I came out in 1996 just four months shy of my 35th birthday. I took the leap a year before Ellen DeGeneres made television history with her own announcement, and middle-American housewives still had another six years during which to delude themselves about Rosie O’Donnell.  I was offered no magazine covers or media icon awards as I took those initial steps toward my lesbian life. Instead, I stared down the daunting task of ending my 11-year marriage and the unpleasant undertaking of explaining to my friends and family why I was doing so.

Sixteen years, one DADT repeal, and seven gay marriage-friendly states later, coming out is a seemingly easier task.  But just as every hitter is only as good as his last at-bat, coming out is only as easy as those in your immediate circle of friends, family and co-workers make it. Coming out experiences are like snowflakes in that each one is different, and, yes, they’re also like a box of chocolates; you never know what you’re going to get.

For others who, like me, didn’t come to terms with their authentic lesbian self until later in life — perhaps your parents didn’t send you to summer camp or you skipped college — I’ve prepared the following guide. Mind you, I’m no expert and don’t have any initials after my last name, but I did already walk a mile or two in the shoes you’re about to try.

Possibly you had a same-sex experience earlier in life; possibly not. Maybe dalliances outside your existing hetero relationship lead to the Sapphic epiphany; maybe not. Perhaps you’ve simply always felt different than your fellow soccer moms, or perhaps you’ve felt for them. For my part, I’d had a girlfriend in my late teenaged years, but after marrying a man at age 23, I never consciously gave serious consideration to the possibility that I might be a lesbian or at least bisexual.

Whatever your specific circumstance, it’s important that you understand and assess your motivation to ensure you’re not diving into the lady pond for all the wrong reasons. Sure, that Katy Perry song is catchy and Ellen and Portia make a cute couple, but leaving a marriage for lesbianism is a lot more permanent than buying a red convertible to satiate that mid-life crisis. Even if you’re certain of your motivations, talk to a therapist who can help successfully guide you through the transition. Mine was able to help me see that the restlessness and “something’s just not right” feeling I’d had my entire adult life meant a change was in order, even though I’d not kissed a girl in almost 15 years.

Be a little selfish, but not too much
After what may have been decades of suppressing your true self it may be tempting to make your evolution all about you, but remember, especially if you’re leaving an otherwise happy marriage and children are involved, being a newly minted lesbian does not automatically make you the center of the universe.

As smitten as you might be with that woman you just met online, remember that your announcement may have served as a one-woman wrecking crew on at least one other person’s life. Your decision has been made, but you can deliver it — and execute it — with compassion and empathy. This is an area in which I personally have a few regrets. Shoe-horning a new partner into the equation just eight months after leaving my marriage wasn’t good for my relationship with the new girlfriend or my son. Though my shell-shocked ex-husband was a trooper and helped us move her furniture into my apartment when she relocated from half-way across the country, asking and allowing him to do so wasn’t one of my most shining moments as a human being.

Keeping perspective on your coming out is another area where a good therapist can be invaluable. Later in life you’ll want to look back on your transition period as a positive event. Don’t behave in a way you’ll later regret.

Figure out who your real friends are, then reassure them
Sally may have been your best friend for 20 years when you were trading tips on how to get hubby’s athletic socks clean, but what happens when you tell her you’re blowing up your traditional family and marching in the Pride parade? By nature, people are often reflexively threatened by change and on a scale of one to ten where one is “changing the roll of paper towels in the kitchen” and 10 is “making a transatlantic move,” coming out as lesbian may be a 12 to some of your lifelong girlfriends.

All this time later, I remember the coming out phone call with my best friend, Jayne. (Yes, I was too chicken back then to do it in person.)

“I have something really bad to tell you,” I nervously started.

“How bad can it be?” Jayne asked, my worst revelation to her up to that point being that I’d once illicitly borrowed her husband’s classic Cadillac convertible to drive friends to a concert while house sitting for her.

“The only thing that could be ‘pretty bad’ is if you’re having an affair with my husband,” she joked.

With that as the measuring stick, my confession that I was leaving my husband and the accompanying fact that I was a lesbian were non-events to her. However, the problems we encountered were down the line and wholly unavoidable if I’d have realized that my best straight girlfriend may have been feeling insecure about her role in my life once the lesbian girlfriend entered the scene.

It never crossed my mind that Jayne might wonder if she’d still be needed for advice, consolation and camaraderie. We’d been friends forever and, in my mind, that wasn’t ever going to change. But she needed to hear that she would still be needed, an easy assurance as every woman, straight or gay, needs a best friend to complain to about their partner. So while the rock-solid status of your friendships may seem obvious to you, go ahead and state the obvious.

Put yourself out there
It’s one thing to be a non-practicing Catholic but being a non-practicing lesbian is just no fun at all, so finding lesbian friends as you make the shift is über-important, too. Someone is going to need to explain the lesbian glossary (e.g., butch, femme, top, bottom, pillow princess, etc.), the meaning of those little blue-rectangle-with-the-yellow-equal-sign bumper stickers, and the revered status of the rainbow in the gay and lesbian subculture.

Fifteen years ago, I initially carved out my little lesbian community online in the form of chat rooms, but those have devolved significantly over the years — don’t go there. Instead, check with your local gay and lesbian community center or find a Meet Up group online. While you may feel alone, believe me when I tell you that there are scads of other women coming out of marriages, seeking companionship, or who are otherwise open to meeting fresh meat, uh, I mean, meeting someone like you.

Walk softly and carry a lot of knowledge
There are few things in life more freeing and self-satisfying than wholly owning who you are and making no apologies to anyone for it. However, as you initiate your unique coming out process it’s important that you take measure of the potential repercussions in the various facets of your life. “Coming out” isn’t a one-time event nor does it have to be an all-or-nothing proclamation. While you may be relieved to share the news with friends and family, remember that, sadly, employers in many states may still fire an employee for no other reason than she is homosexual.

I was extremely fortunate in this regard and many of my closest friends also happened to be my boss and co-workers. But not everyone is that fortunate. I don’t want to rain on your rainbow parade, but do your homework on LGBT rights in your state and consider the consequences when deciding when and with whom to share your coming out news.

Don’t get your “L” words mixed up
Finally, while you will be understandably anxious to sow your freshly cultivated lesbian oats, as you should before committing to any long-term relationship, take your time and date several women to learn which qualities you want and don’t want in a partner. Don’t let anyone tell you that dating several people at once makes you an inherently bad person or allow your hormones trick you into mistaking lust for love. My aforementioned first post-marriage relationship was doomed from the start because it was rushed. We didn’t really know each other. A half-dozen passionate weekend visits do not necessarily make for enduring compatibility. Keep your wits about you, even if you do feel like a hormonal high-schooler, or you’re apt to lose some electronic equipment and pets.

For a list of lesbian-related resources, including groups or organizations which can provide counsel during the coming out process, visit Lesbian.com Resources.

13 Responses to “Better late than never: A mature lesbian’s coming out guide”