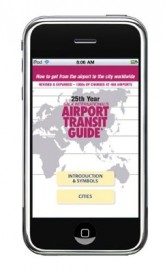 It must have beguiled and infuriated business travelers during the past couple of years as they watched leisure travelers navigate through airports and into their cabs and shuttles seamlessly thanks to a handy airport app on their iPhones and iPads.

But now, Android users have an upgraded version of the airport app produced by Salk International’s Airport Transit Guide: How to Get from the Airport to the City Worldwide. Users can download the highly rated app and take it for a spin testing out two out of 460 airports worldwide offered by the app for free at Google’s Play Store.

If you like it, you can get the whole thing for $4.99. The app will be available at Amazon Apps soon.

The more than 30 year old guide’s app is among the Top 10 Travel Apps in the U.S. and internationally.

The addition comes after Ron Salk, editor-in-chief and publisher of Salk International’s Airport Transit Guide received hundreds of requests for the airport app from non-iPhone users.

“In response to many hundreds of requests from smartphone owners, we finally had to launch the Android app,” says Salk.

His only wish is that the app could have been released sooner, but other priorities got in the way, he says.

The updated app, Version 1.3 of the 25th Edition of the guide, which went digital in 2010, underwent a major upgrade adding hundreds of data changes, a landscape feature making it more readable, and new search functions including a nonwireless connection to access the information. Once the app is downloaded, users can get detailed price, schedule and route information to taxis, shuttles, limousines, buses and trains along with parking rates and other tips without being in a hot spot when hitting dead zones.

When in the zone, the app gives travelers interactive wireless connectivity to the airport and transportation companies, an added bonus that has been popular among the 27.9 million iPhone and 7.7 million Android users that like the app at iTunes.

Users will also appreciate that in exchange for a higher price tag the app is ad free and has no plans to pick up ads again in the future.

“We had 99% 5-star reviews,” says Salk, “except for a couple of iPhone reviewers who did not think that we should accept ads on a paid app, even though they were not transportation related. We agreed and dropped the ads.”

The Airport Transit Guide, founded in 1982, was converted from print to digital in 2010, with its 25th Edition.