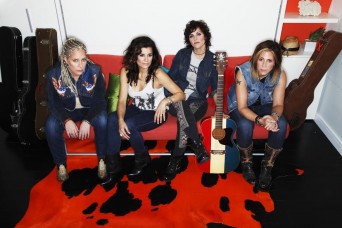 Antigone Rising is an all-female band that has been on the alt-country music scene since the early 2000s. After years of touring with high-profile headliners such as The Rolling Stones, Aerosmith and Joan Jett, band members Kristen Ellis-Henderson, Cathy Henderson, Dena Tauriello and Nini Camps are back with a new EP, “Whiskey & Wine Vol. 1&2.” Their first single, “That was the Whiskey,” is a lighthearted tribute to wild southern nights.

Despite the carefree subject matter, Antigone Rising has been on a serious journey in recent years. In 2012 they traveled as cultural ambassadors throughout the Middle East. And the year before that, founding band member Kristen Ellis-Henderson and her wife wrote “Times Two, Two Women in Love and the Happy Family They Made.” Since then, the band has taken a firm public stance in favor of marriage equality. Now, Antigone Rising is hitting the road again with tour dates lined up across the U.S.

In this interview, I spoke with Kristen Ellis-Henderson about the inspiration behind “Whiskey & Wine” and what it’s like being an all female band on the country music scene.

Your newest single, “That Was the Whiskey,” is currently a smash on Country Music TV and CMT.com. Why do you think it’s had such resonance with the country world?

I think country music fans love songs that tell stories. “That Was the Whiskey” is a really fun, and probably for some people very relatable, story song.

Tell us about the “Whiskey & Wine” EP — what was the creative process like and what messages do you want fans to take away from it?

We really do work and think hard about the songs we write. We are entirely independent, from recording the songs in Nini’s home studio all the way to raising funds to promote the EPs. So, in a sense, some fans who are really plugged in may take away a sense of indie spirit. But most importantly, I just want people to listen to the music and really like it.

Antigone Rising’s style has been designed as alt-country rock. Is this EP going further to the country side of this spectrum?

I think there are very obvious country elements to it, but I do not think it’s more country than rock. Country music has really risen to the mainstream in recent years and the reason for that is because of the great songwriting coming out of Nashville. Country music is foremost about great songs. The fact that Nini [Camp] and I get to co-write with brilliant songwriters like Lori McKenna (Faith Hill, Little Big Town) and Kristen Hall (formerly of Sugarland) who happened to have penned massive country music hits, might speak to why our songs have a country feel. But Nini and I wouldn’t write it if we didn’t feel it. And the band certainly wouldn’t play it. I firmly believe we are a rock band with a country sound. And in 2014, that should be OK.

Bass player Kristen Henderson and her wife wrote a memoir in 2011 “Times Two, Two Women in Love and the Happy Family They Made” and have since become “poster girls” for LGBT marriage equality. Has that had an impact on relationships with other country music stars and your fan base?

I have found, if anything, that being “poster girls” for the LGBT equality movement has broadened our fan base. I think people are drawn to honesty and when you’re telling the truth, people like it. Our audiences are very diverse. Our country music friends have always been our friends’ they’re still our friends and are supportive. The Nashville community and the country music community as a whole may not be as open minded, but we’re not a band that goes toward the darkness. We look for the light — and are drawn to the open doors and the opportunities. We don’t look for the glass half full side of our story. Our glass is overflowing.

You are in an all female band in an industry that is still dominated by men. How has this affected your journey?

Again, we always spin it to our advantage. At a festival with 10 guy bands, we rock the house and people leave saying “the all female band is who I remember.” And if they’re not saying that, we haven’t done our job. That being said, there needs to be more opportunities for women in the business. It has not changed much since we’ve been in it. I do believe female artists need to empower each other — and one critical way of doing that is to give each other opportunities. We have been in situations where we did not get an opening slot with a major female artist because the promoter or manager felt like too many women on a bill won’t sell tickets. The Bangles brought us out on tour with them a few times. Two all-female bands on the same bill. You don’t see that very often. And we plan to pay that forward in our career.

In 2012, Antigone Rising performed in the Middle East as United States Cultural Ambassadors. What was the most memorable moment from that trip?

There were several memorable moments. But one in particular jumps out instantly. Our first day in the West Bank (Palestine), we did an outreach program in a small village called Nahlin, and it’s an area of great unrest in the region. We spent the day with all the women in the village — talking, performing, exchanging American traditions for theirs. Each generation of women in the village shared a tradition with us. They cooked us lunch and we were so moved by their hospitality and graciousness. It shattered any preconceived notions we brought with us that people in this region hate Americans. It was the opposite. The people in this village just wanted to share their customs and culture with us. It was a really intense and amazing day. The U.S. Consulate in Jerusalem edited a great video of our experience.

Which band member has the quirkiest habits while touring?

The irony is that one of our road crew members has the quirkiest habits. And without naming names, we cannot leave hotels in the morning until this road crew member’s feet are completely dry — often she will use a blow dryer to dry them. That being said, it makes my band mates quirky habits pale in comparison. I mean, the road makes you do odd things. I tie my underwear in a knot after wearing them so as not to accidentally wear them again. That’s a pretty deep, dark road trick I am sure my band mates will punch me in the arm for admitting to publicly. We’ve been touring for so long now I don’t even know what quirky is.

Antigone Rising has toured with artists such as Joan Jett, Aerosmith, The Bangles and The Rolling Stones. Which of these artists had the wildest fans?

Joan Jett, hands down. Her fans are die hard and fiercely loyal.

Tell us about the best piece of fan mail you’ve ever received.

When people send us videos of their kids singing along to our songs, or when young performers send us links the them performing our songs, those are always the best.

As a woman-fronted band, you have a lot of female fans and little girls looking up to you. What advice would you give them as they chase their passions in life?

Need more Antigone Rising? Help the band raise money to tour and market by visiting them on PledgeMusic.  Five percent of the proceeds will be donated to GLAAD upon hitting the targeted goal. The campaign is also granting backers the opportunity to get an exclusive advanced digital download of “Whiskey & Wine — Volume 1” before it’s available anywhere else.