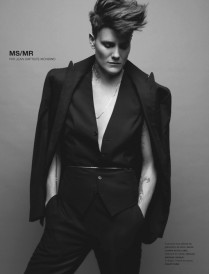 The recent prominence of androgyny, possessing both masculine and feminine characteristics, in the fashion industry is reforming gender-normative standards. Casey Legler, 36, the first woman to sign exclusively as a male model, shows nothing short of displaying her individuality in her photographs. She is acutely self-aware and confident. “Being the first woman on a men’s board is the least surprising bit to me. It’s me.” Legler said.

Legler’s contract to be a male model is an encouraging and a symbolic gesture for breaking gender barriers, more precisely because she declares, “I’m not androgynous. There is no ambiguity with me.” She is not disguising to fit a visual idea of being a male model. She is merely projecting her authenticity.