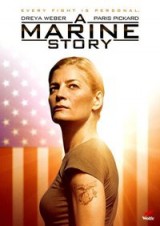 When she returns to her conservative home town she agrees to coach a troubled teen named Saffron (Paris Pickard), who faces jail time if she doesn’t join the Marines.

Alex is the authority figure Saffron needs to turn her life around. She fuels the young woman’s transition from slacker to boot-camp-ready recruit. But an ugly campaign to “reveal the truth” about Alex’s discharge threatens to derail both women’s futures.

This beautiful, inspiring and timely film has won 17 awards and counting.