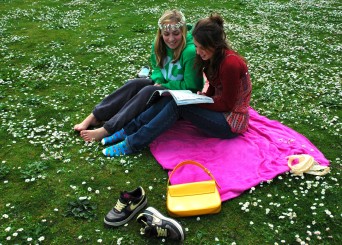 It’s already August and summer is flying by. But the weather is still warm and it’s prime “sit outside and read” time season. There’s still time to soak in some sun and enjoy some good queer stories.

This ‘coming of age’ novel is a refreshing departure from traditional coming of age novels. It definitely has some of the hallmark of it’s predecessors, starting with a crush on a straight girl, conservative relatives and born-again Christian disapproval. However, Cameron Post is a relatable protagonist whose personality is able to elevate the book to the next level. Danforth leads readers to places they didn’t expect to go in her debut novel.

2. “The Adaptation Series” by Malinda Lo

“Adaptation” and it’s sequel, “Inheritance” are technically for ‘young adults,’ but anyone who enjoyed “The Hunger Games” and “Divergent” will love “The Adaptation Series.” Lo’s story follows protagonist Reese as she juggles government conspiracies, aliens, bisexuality and polyamory. This fast and fun read is perfect for a summer weekend.

Lesbians, drag kings, murder, the mob- what more do you need? Davis takes readers back in time to the way our lesbian foremother’s lived in 1949. Read our review for all the reasons to read “Under the Mink.”

Imagine an entire planet, solely occupied by women- that’s what you are going to get in Nicola Griffith’s “Ammonite.” In Griffith’s carefully crafted world, women are friends, family members, enemies, lovers and parents. It’s a pleasure to read about two woman reproduction and to witness a world where women can, and have to, fill all roles- both traditionally masculine and female to keep their world running. This vision is reason alone to read this book- but Griffith also throws in intergalactic colonists who threaten this planet’s entire existence and you have a real page turner.

5. “The Argonauts” by Maggie Nelson

Maggie Nelson is an established poet and non-fiction writer. “The Argonauts” is her first treatise on her own queerness and her relationship with genderqueer artist Harry Dodge. “The Argonauts” reads like poetry and tackles issues of sexuality, long term relationships, queer parenthood, and gender.

6. “The Inheritance Trilogy” by N.K. Jemisin

This trilogy starts with it’s protagonist, Yeine, being thrown from her rural hometown into the royal palace of a bustling kingdom, that is bursting with magic and gods. Fantasy books have a huge problem with whitewashing protagonists and entire worlds. Jemisin’s world includes people of all colors and genders, which is a breath of fresh air. Okay, so here’s the thing with this Trilogy, there’s a lot of straight people sex and romance. But, by the third book, Jemisin starts playing with gender and queerness in a way that both makes sense in the story and is extremely satisfying.

Happy reading! Read any of these already? Let us know what you thought in the comments!

*photo credit: On a pink, green, and white cloud, two young women reading a book at Greenlake, with a daisy chain in a field of flowers, Seattle, Washington, USA via photopin (license)