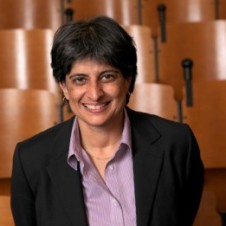 BY VICTORIA A. BROWNWORTH
Curve

“I’m such a nerd, and I’m proud of it,” says Urvashi Vaid, laughing. The title of her new book, “Irresistible Revolution: Confronting Race, Class and the Assumptions of LGBT Politics,” sounds a little nerdy. And if “nerd” can be defined as “intellectual political activist and theorist,” then nerd she is. Move past the intense title of “Irresistible Revolution” and into the table of contents, however, and you’ll see that her nerdiness is synonymous with passion: a passion for justice, equality, inclusion, change.

“It’s a very optimistic and practical book,” she says. What Vaid wants does seem practical enough: for LGBT people to have a place at the table. A political animal, she has spent her life working to get women and queers into seats of power. But she also wants more–hence that subtitle. As Vaid sees it, the LGBT movement is at a crossroads. Her biggest fear is that LGBT activists will see the recent gains in the fight for marriage equality as a reason to slack off and lose ground, the way the feminist movement did after Roe v. Wade became law. “One of the worries that underlies my book is a movement that demobilizes because it wins marriage equality,” she asserts. “I get energized by the wins, but I also get energized by the losses.”