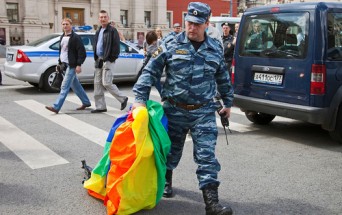 BY SARAH TOCE
The Seattle Lesbian

With so much talk of Russia and gay rights in the news as of late, what is really going on over there and do we — as Americans — really need to get involved? The answer is a resounding: Yes. In Russia, if you walk down the street holding hands or kissing your partner — you are subject to arrest, physical, mental, verbal and other such inhumane abuses. Last week, images were released to the world when a kiss-in occurred and the participants were beaten within inches of their lives — by the authorities. Because, did we mention…gay bashing is legal in Russia?

In a bold statement sent Monday to civil rights group Queer Nation, 23 leading LGBT Russian activists and their supporters called for a broad boycott of Russian products and the 2014 Olympic Winter Games in Sochi. And what can you do about this violence? What can you do to stop the attacks on innocent people in a country Sarah Palin can see from her house? You stand up and you fight. You boycott if that is what you are able to do. But you have to do something.