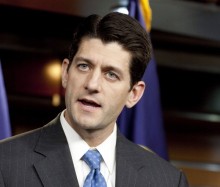 Romney made the announcement in Norfolk, Va., before the battleship U.S.S. Wisconsin — a ship that bears the same name as the state Ryan represents in Congress — introducing his choice by talking about Ryan losing his father at a young age.

“As he did, he internalized the virtues and hard-working ethic of the Midwest,” Romney said. “Paul Ryan works in Washington, but his beliefs remain firmly rooted in Janesville, Wis.”