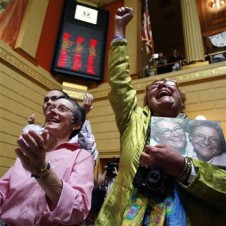 Rhode Island Gov. Lincoln Chafee on Thursday signed a bill that will allow same-sex couples to marry in the Ocean State. “This law does not take anything away from a heterosexual couple,” lesbian state Rep. Deb Ruggiero (D-Jamestown) said. “Nothing is going to change, but tomorrow morning for gays and lesbians it’s going to be a very, very different world.”

“Governor, with the stroke of your pen, you will undo centuries of discrimination,” state Sen. Donna Nesselbush (D-Pawtucket,) who introduced the bill in the state Senate, added before Chafee signed the measure into law. “Our moment has arrived.” Rhode Island’s same-sex marriage law will take effect on Aug. 1.