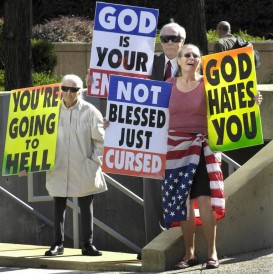 The city council of Topeka, Kan., home to the Westboro Baptist Church, on Tuesday night passed a measure to promote ways to end LGBT discrimination in the city.

The Topeka City Council voted 6-2 to pass an ordinance to include sexual orientation and gender identity on a list of issues about which the city’s Human Rights Commission educates the public in order to prevent discrimination. The vote came after Councilman John Campos II (D) publicly announced that he was bisexual, a fact known to his friends and family but not previously a matter of public record. The ordinance was sponsored by City Councilman Chad Manspeaker (D), whose district includes Westboro.