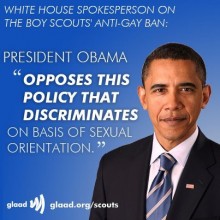 President Obama opposes the recently affirmed Boy Scouts policy of banning gay members, according to a statement from the White House sent in response to a Blade inquiry.

“The President believes the Boy Scouts is a valuable organization that has helped educate and build character in American boys for more than a century,” White House spokesperson Shin Inouye said in the statement. “He also opposes discrimination in all forms, and as such opposes this policy that discriminates on basis of sexual orientation.”

In a follow-up email, Inouye said Obama won’t resign or relinquish his position as honorary president of the Boy Scouts as result of this position.