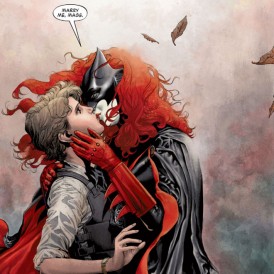 The authors of “Batwoman” are exiting due to creative differences with DC Comics. Their decision came, in part, after an alleged ban on a same-sex marriage storyline. Co-authors J.H. Williams and W. Haden Blackman announced they plan to leave “Batwoman” after issue #26 is released in December, The Hollywood Reporter first noted. The announcement was made in a blog post Wednesday.

“In recent months, DC has asked us to alter or completely discard many long-standing storylines in ways that we feel compromise the character and the series,” they wrote. “We were told to ditch plans for Killer Croc’s origins; forced to drastically alter the original ending of our current arc, which would have defined Batwoman’s heroic future in bold new ways; and, most crushingly, prohibited from ever showing Kate and Maggie actually getting married. All of these editorial decisions came at the last minute, and always after a year or more of planning and plotting on our end.”

UPDATE: DC Comics responded to The Huffington Post’s request for comment in an email Thursday afternoon saying, “As acknowledged by the creators involved, the editorial differences with the writers of BATWOMAN had nothing to do with the sexual orientation of the character.”