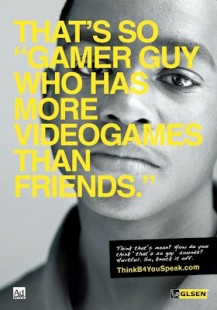 A new study from the University of Michigan has found that simply overhearing the expression “that’s so gay” used to describe something in a disparaging way can have negative consequences for gay, lesbian, or bisexual students. Practically every college student interviewed for the study had heard “that’s so gay” at least once in the past year, with more than half hearing it with much more frequency. Those who heard it more frequently were more likely to report feelings of isolation, as well as negative health symptoms, such as headaches, poor appetite, or eating problems.

Study author Michael Woodford, assistant professor of social work at U-M, describes the results, “Given the nature of gay-lesbian-bisexual stigma, sexual minority students could already perceive themselves to be excluded on campus and hearing “that’s so gay” may elevate such perceptions. ‘That’s so gay’ conveys that there is something wrong with being gay. And, hearing such messages about one’s self can cause stress, which can manifest in headaches and other health concerns.”