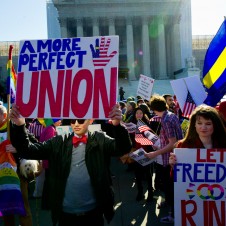 A new poll from the Pew Research Center finds that 72 percent of Americans believe that nationwide marriage equality is “inevitable.” This includes 85 percent of people who support marriage equality, and even 59 percent of those who oppose it. There were not even significant differences across political lines; in fact, Republicans believe it’s inevitable (73 percent) just as much as Democrats (72 percent) and independents (74 percent).

The survey also assessed how familiar individuals are with gays and lesbians and found that 87 percent of Americans personally know someone gay, up from 61 percent in 1993. About half (49 percent) have a close friend or family member who is gay. Those who know a lot of gay people are twice as likely (68 percent) to support marriage equality as those who don’t (32 percent).