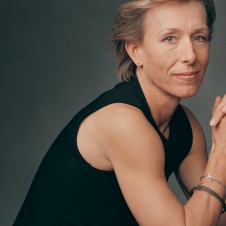 Retired tennis champion Martina Navratilova on Monday blasted Russian lawmakers who unanimously passed a bill last week that would ban the “promotion of homosexuality” to minors.

“It is kind of frightening that people could agree that much on that,” she told the Washington Blade during a telephone interview from Paris, noting the 436-0 margin by which the measure passed in the Russian Duma. “It just goes to show how totalitarian that country is because you can have a vote on that.”