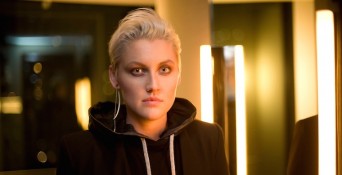 In Denton, a small college town situated north of Dallas on the Texas prairie, you can find artists of all genres honing their craft. It is here that Sarah Jaffe has been perfecting her sound. Her first full length album, the critically acclaimed “Suburban Nature” (2010), announced the singer-songwriter’s arrival onto the folk-pop scene with many critics lauding her as the next big thing.

Since that release, Jaffe began to transition from folksy balladeer to an artist with a more electro-pop sound. Her latest release, “Don’t Disconnect,” finds Jaffe furthering this electronic sound and adding to it hip-hop influences. She is an artist who is constantly growing both musically and lyrically and it shows with her new album.

Jaffe took some time to talk about the evolution of her sound and how she pushes boundaries.

Your style has been evolving into more of an electro pop sound. What has influenced this?

I think it’s just been more of a natural progression. More so than you might think. I don’t think I make music with the intention of sounding different. I think my intent is to grow a little bit more as a writer and musician with each record. Sometimes that growth comes with different instrumentation.

Do you feel like you’ve taken any big risks with “Don’t Disconnect”?

Not really. I made a record I am really proud of with a group of musicians I adore. Feels risk free.

Is there a theme that runs through the new record, “Don’t Disconnect”?

Not a conscious theme, no. But I definitely think there’s a common thread that could kind of tie them together. All except for a couple were written around the same time.

Have you pushed boundaries and experimented more with this album than previous albums?

I think I always experiment with moving outside my own comfort zone in the studio. Whether that be playing an instrument I am not used to playing or ..whatever really. I think being in the studio is where you push your own boundaries a bit.

Do you find that your music tends to be autobiographical or do you strive for a universal theme?

Probably a bit of both. People enjoy relating to one another. It’s like the small joy you get from reading your horoscope. When someone else reveals the truth about your life. That’s one of the joys about songwriting. Is you kind of reveal some truth about yourself and then someone comes along and says “that song is totally me.” So it may be autobiographical but I think I hold out hope that it will relate to somebody.

If you could collaborate with anyone, who would it be?

What’s one of your best live experiences?

Recently, I played to my hometown of Dallas at the Majestic Theatre. And it was hands down my favorite. The theatre is beautiful, the crowd was wonderful, and I think we all just felt good.

Touring and playing songs from the new record!

For more information about Sarah Jaffe, visit her website.