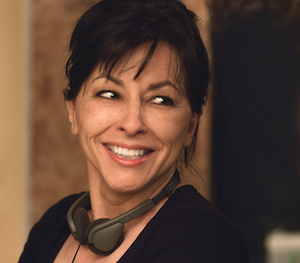 Canada-born mother of four, Marina Rice Bader began her career as an actress in Texas. After moving to Los Angeles, she was repelled by the energy of the industry and embarked on a career as a photographer. After 18 years shooting magazine spreads with stars who make TMZ reporters foam at the mouth, she hung up her camera.

It’s clear from her new film, “Anatomy of a Love Seen,” that Bader has a keen eye. Every shot is a masterpiece of cinematography. Her lighting and composition are exquisite.

Shot in five days based around an outline, the actors improvise their way through a heartwrenching day. Two women who shot a love scene for a film are in to re-shoot the scene, but without nudity, so the film can air on broadcast television. One hitch, and it’s a big one, Mal and Zoey, the stars of the film, had fallen in love during that scene. Mal inexplicably exits the relationship, leaving Zoey devastated. Now, they must re-shoot that magic moment.

Without a script, the four principle actors make their way through the emotional aftermath of that first love scene. Like Bader, the film is raw, genuine and warm. Bader does an amazing job casting three actors and herself in the main roles. Yes, herself, she plays the director, so you actually see the director directing this movie within a movie.

It’s not Bader’s first rodeo, but it’s the first one we get to watch. She shot “Raven’s Touch” with Traci Dinwiddie (“Elena Undone”) and Dreya Weber (“A Marine Story”) last year. While “Anatomy of a Love Seen” was a rush job, it comes together beautifully and in time to hit festivals this summer.

“Anatomy of a Love Seen” screens Friday, July 18, 2014, at 7pm at THE DGA 1, located in The Directors Guild of America in West Hollywood, California. The premiere will be followed by an exclusive cocktail reception after-party with the entire cast and crew.

Bader cut her lesbian film chops as executive producer of “Elena Undone” and “A Perfect Ending” with her production company Soul Kiss Films.

She took time from her busy schedule to talk to Lesbian.com.

You filmed “Anatomy of a Love Seen” in a remarkably short time, especially given that it’s improvised. What was the set like? How were you able to manage it on such a tight schedule?

The set was incredible. You had this group of 25 people attempting something quite difficult and out of the box, so we were like “we can do it” every day and every day we did. The way we managed was to shoot in one location. That was really the key. No company moves. Sets you could literally walk away from. All 12 hours each of the five days was spent shooting. It was so much fun.

How did you get started directing? What was your inspiration?

My inspiration was a lifetime of creating movies in my head, so when I finally got over the fear (it only took me 58 years), I jumped in with both feet.

You have another film coming out soon as well. Tell us about “Raven’s Touch.”

“Raven’s Touch” stars Dreya Weber and Traci Dinwiddie. It should be available this fall.

How do you balance your projects and family? What’s your secret?

Believe me, if I had a secret, I’d share it. It’s the universal working parent’s conundrum, right?

I’m happy that my kids are older now. They understand, “Honey, if I don’t work, we can’t pay the rent or go on vacations, etc.” They don’t like not having me available 100 percent of the time, but they know that it’s necessary.

What’s great is that when I’m not on set or in meetings, I work out of my home, so they see me all the time, even when I’m eyeball deep in a project.

What grounds or inspires you in your every day life?

I’d like to say my kids ground me, but my life with them is like a three-ring circus. My love for them grounds me. That makes more sense.

As for inspiration, I have to say that for the first time in my life, I’m inspiring myself. How cool is that?

Besides making films, do you have any hobbies?

Hmm, at the moment, I’m happy if I get a good book in. I just finished “Strength in What Remains.” There’s no walking away from that one unscathed. I do have my eye on rock climbing on real rocks, not plastic.

What advice would you offer to aspiring filmmakers?

Well, there are a thousand possible answers to this questions, but the best tangible piece of advice I can think of is this: Do something that really scares you. And I mean something that makes you want to cry just thinking about it. Terrified of snakes? Go hold one at a pet store. Afraid of the dark? Go spelunking in a deep, dark cave. Terrified of heights? Go ziplining. Once you conquer that fear, then make a movie. To survive in this world, you must be fearless.

What’s your favorite part of making a film?

I love putting the pieces together. I truly have my hands on everything from story to casting to wardrobe to the final post decision. The utter thrill of seeing everything come together, it’s pretty orgasmic.

What’s the most difficult part?

Funding. Nothing new there.

My plan is to make a film this fall for release next summer. Details are under wraps for now, but suffice it to say my audience will be welcomed into a world few have ever seen.

Then, in the fall of 2015, I’ll be filming a story very dear to my heart — It’s been in there a long time — called “Red Sky Theater” in Arizona. I’m so stoked to finally make this film.