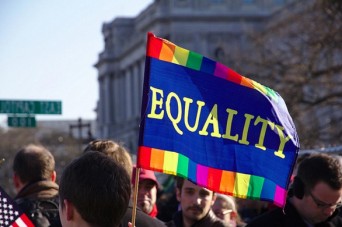 What did you miss this week in the world of LGBT news? Check out our Lesbian.com round-up and you’ll be ready to gather ’round the rainbow-colored water cooler to talk about five of the biggest, best and most interesting stories for June 15-21.

5 marriage equality cases get their day in court

On Monday, the U.S. Sixth Circuit Court of Appeals set August 6 as the date on which it will hear arguments for the five marriage equality cases pending before the court. The Cincinnati-seated court announced that arguments for cases in Kentucky, Michigan, Ohio and Tennessee would take place at 1p.m. in what could be a historic day for marriage equality in those states.

Only the Michigan case pertains directly to the right of same-sex couples to marry. The others address issues related to birth and death certificates and state recognition for same-sex marriages performed elsewhere.

Speaking at a Democratic National Committee gala in New York City Tuesday, President Obama received a standing ovation after announcing an executive order which would bar federal contractors from discriminating against LGBT workers.

“We don’t benefit as a country or an economy – businesses don’t benefit if they’re leaving talent off the field,” Obama said. “And that’s why I’ve directed my staff to prepare for my signature, an executive order prohibiting discrimination by federal contractors on the basis of sexual orientation and gender identity… Because in the United States of America, who you are and who you love shouldn’t be a fireable offense.”

Obama went on to encourage passage of the Employment Non-Discrimination Act (ENDA).

“It would be better, by the way, if Congress passed a more comprehensive law that didn’t just cover federal workers. And we need to keep working on that, so don’t take pressure off Congress,” Obama added.

Comedians and late night talk show hosts continued to lambaste Texas Governor Rick Perry for comments he made the previous week before a gathering at San Francisco’s Commonwealth Club. Stephen Colbert, John Stewart and others chided Perry for comparing homosexuality to alcoholism.

“Whether or not you feel compelled to follow a particular lifestyle or not, you have the ability to decide not to do that,” said Perry. “I may have the genetic coding that I’m inclined to be an alcoholic, but I have the desire not to do that, and I look at the homosexual issue the same way.”

The latest to take aim at Perry’s remarks is Funny or Die who rebuked the governor in the best way possible – with uproarious hilarity – in the following NSFW video released this week.

Rick Perry on Homosexuality from Funny Or Die

The gay rights group Pink Monday Foundation pulled the rainbow-colored wool over the eyes of international news outlets this week with the announcement of plans for the establishment of GayVillage, a purportedly “protected,” LGBT-only community to be constructed in the Netherlands.

The elaborate hoax gained credibility via a professional-looking website and promotional videos touting the development, as well endorsement by the mayor of Tilburg, the GayVillage’s announced location.

Pink Monday said that the outrage sparked by the stunt was exactly what they were hoping for. “The negative reactions we got are positive for Pink Monday. We are happy that people think a gay village is a crazy idea.”

News outlets were incensed by Mayor Peter Noordanus’ participation in the ruse, claiming that their credibility had been impacted. Noordanus said he had “underestimated the impact of my quote,” adding, “I did this with the aim of drawing attention to gay rights and not to trick the media and society.”

On Thursday, the General Assembly of the Presbyterian Church USA (PCUSA) voted to amend its Book of Order to redefine marriage, replacing the phrase “a man and a woman” to “two persons.”

The 429-175 vote by leaders of the PCUSA launches a path toward gay marriage throughout the denominations 10,000 churches across the country. A majority of the churches 172 regional bodies must now approve the change before it becomes official, a process which could take up to a year.

“This is a glorious day for the church and for LGBT people who have been seeking full inclusion here for decades,” said Rev. Randy Bush, the co-moderator of the board for Covenant Network, a pro-LGBT church group.

In a separate vote, the PCUSA also voted to allow pastors to officiate same-sex marriages in states where marriage equality is the law. No further approvals are needed on that measure, made final by the group’s 371-238 vote.