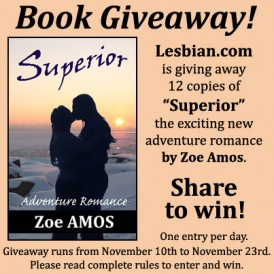 *Spoiler Alert!* This review gives you a sneak preview of the plot of Superior. Prefer to be surprised when you read it? Check out our interview with Zoe Amos.

This short novel from Zoe Amos takes place in a dystopian society at some point in the future. The action takes place seven years after Civil War II, and a new country, the Superior Protectorate, has been established as a buffer zone between the now fragmented United States and Canada. Miss Kristian Browne has grown up and graduated from school. It is time for her to be sent to a farm camp for two years, along with her best friend Miss Rhona. The farm camp is run like an Israeli kibbutz, and Kristian is assigned to work with the mechanics, while Rhona works in the lab. At first the two girls are happy with their lot and don’t question that in two years, they will be forced to marry, either a man of their own choosing, or through a requested arrangement of the Protectorate. As they grow closer and begin to explore a physical relationship, First Miss Rhona and then Miss Kristian fantasize about running away and living together as a couple, something that is forbidden by the Protectorate. If their relationship is discovered, they will be separated and punished.

Rhona is stalked and harassed by a fellow worker and Kristian draws the romantic attention from a man. Eventually, the girls’ relationship is discovered and Kristian and Rhona are indeed separated. What happens next? You’ll have to read it to find out!

I found this novel to be engaging in both its style and content. It doesn’t take too much imagination to realize that a state like Michigan, where the governor has appointed managers to take over several city governments and elected officials have been stripped of their offices, could be a model for all that happens in this futuristic tale. Citizens of the Protectorate have microchips embedded under the skin so that they can be monitored and tracked. So much easier than allowing the NSA to hack all our phones, right? And people being forced into straight marriages, that could never happen. Being forced to flee one’s homeland simply because of love shared between two women or two men, that’s just fantasy. Of course.

I found the writing and the pace quite engaging. The story is interesting even if you don’t draw parallels to present day politics, but I sure had fun doing that.

Bett Norris is the author of “Miss McGhee,” and “What’s Best for Jane.”