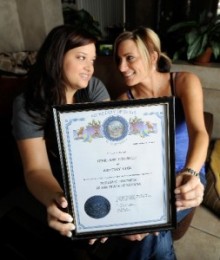 Brittney Leon and Terri-Ann Simonelli with their domestic partnership certificate

A lesbian couple in Nevada is raising awareness about the inequality couples experience without marriage after Spring Valley Hospital refused to recognize their relationship. Brittney Leon and Terri-Ann Simonelli have a domestic partnership, which under Nevada state law grants couples all the same rights as married couples. When Leon checked into the hospital last month because of complications in her pregnancy, the admissions officer told Simonelli she would have to secure power of attorney to be with her partner.

Leon ended up losing her baby, and Simonelli had to rely on the doctor for updates, spending long stretches of time without news on her partner’s condition and the fate of her family. This was despite the fact that the hospital had no hesitations about accepting Leon’s insurance, which is provided through Simonelli’s job. The Las Vegas Review-Journal attempted to get a comment from the hospital about the incident: