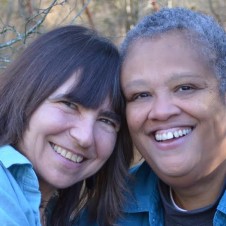 “We live in different towns, and Susan hardly ever wants to talk on the phone,” Elise said tearfully. “It makes me feel so rejected, like I’m not worthy of her time and attention.”

“I love Elise, but I’ve got a really busy life,” Susan explained. “Talking on the phone sometimes feels like too much at the end of a long day. And when Elise gets too demanding, it makes me not want to talk at all.”

“It’s bad enough that Lou doesn’t feel ready to live together,” complained Jerri, running her hands through her cropped silver-grey hair. “But when she makes other plans for the weekend too, I get really upset. How are we supposed to build a relationship if we don’t spend time together? I think she’s just scared of intimacy.”

“Every one of my relationships has ended because my girlfriends just glommed on to me,” commented Lou. “It sucks. Even when I really care about them, I end up having to pull away so they won’t drain the life out of me.”

What do all of these women have in common? Like many of us, they’re struggling with navigating healthy closeness and healthy distance in their relationships. Of course, couples of all sexual orientations confront this issues, but it often takes on a particular intensity in lesbian and queer couples.

All human beings need both closeness and separateness. These needs are hard-wired into us, an essential part of our human psychology. Yet we and our partners often need these things in different ways or amounts. This conflict may not surface during the early weeks or months of our relationship, but it’s bound to come up eventually and when it does, it can wreak havoc. Here’s why.

Whether it’s due to nature or nurture, brain chemistry or conditioning, female couples seem to do the dance of bonding particularly well. When we first fall in love, we often spend weeks or months in a delicious state of fusion. Our new love is all we can think about, and we spend as much time as possible in bed. At this stage, the boundaries of our separate selves feel blurred and permeable; we’re merged, and for many of us, this feels great, at least at first.

But over time, this merged state – which psychologists call “limerence” – begins to fade, because it’s actually produced by a potent mix of brain chemicals. You’re literally “high on love.” And although it might feel like it’s all about your girlfriend, the truth is, you may not even know her all that well yet. The intensity of limerence isn’t so much about her, as about your own brain chemistry. And when those chemicals shift back toward normal, as they inevitably must, you may find yourself asking, “Who is this person?”

Sometimes, as the limerence fades, you may realize that your new flame isn’t the right partner for you after all; what you thought was love may just have been a powerful case of lust.

If you and she are on the same page about that, it doesn’t have to be a big deal. Often, though, women quickly feel stuck together with lesbian super-glue. Even if you have differences that make you ill-suited to be partners, the idea of breaking up feels wrenching, so you struggle along in relationships without much “there there” for years. Of course, this makes the inevitable conflicts and differences even harder.

At other times, you may see post-limerence that the two of you really do have the makings of a relationship. You have similar values, you’re reasonably compatible in your lifestyle habits, your communication mostly flows well, yet still, you’ll face a challenge in transitioning from “the honeymoon stage” into real life.

As we move out of limerence, we move back into our separate sense of self. This means that differences that didn’t matter much to us early on, can suddenly loom large. Often, one of those differences relates to our preferences around closeness and separateness.

For instance, Elise loved talking every day, but after six months Susan, an artist and entrepreneur, felt a need to shift her focus back to the projects she’d been putting on hold. A year into their relationship, Jerri liked nothing better than to show up at Lou’s place on Friday night and settle in for a weekend of cuddling and companionship, but Lou, an introvert, was used to spending good chunks of her weekend alone to replenish herself for the week ahead.

None of these women are right or wrong. They’re just different. And differences can be navigated, but they’re much harder to manage when they touch on our core needs and fears, and trigger physiological states of panic and distress. Often, this is what happens with issues of closeness and distance.

As infants, we all began life in a state of blissful connection with our mothers. But somewhere between age one and two, we began the important process of becoming fully separate human beings. We realized that we had feelings and desires different from those of our mothers, and we began to assert our independence.

If you grew up in an ideal world, your mother (or other relative or caretaker) was always there when you needed her, and always able to gracefully let go and cheer you on when you needed freedom. But few of us were actually that lucky. Maybe your mother was unavailable or even abusive when you reached out to her. Maybe she clung to you when you tried to be separate, or became angry or punitive when you acted like a normally defiant two-year-old.

Frankly, your mother probably didn’t receive ideal parenting from her mother, either. So even if she did the best she could, you likely ended up with some deep-seated fears around not getting enough closeness, not getting enough separateness, or both. Ironically, most of us find ourselves drawn to partners who “push our buttons,” women whose issues fit ours like a lock and key.

The fear of being abandoned is one of the most intense fears there is. It has to be, because it’s designed to ensure our survival. As infants, we would die if no one took care of us. So, even as adults, feeling abandoned – or even fearing abandonment – can trigger that same level of panic. Your rational mind knows that you’re a self-sufficient adult and your girlfriend is just across town, but meanwhile, your “reptile brain,” the part of your neurology designed to keep you alive, goes into high alert. That’s why Conscious Girlfriend calls this feeling PAP, or “Primal Abandonment Panic.”

Yet the fear of being taken over, swallowed up or suffocated is also extremely intense, and again, for good reason. Our psychological well-being requires us to experience ourselves as separate individuals, so when it feels as if someone else is engulfing us, we go into PAP’s opposite, PEP, or “Primal Engulfment Panic.”

All of us have the capacity to feel both PAP and PEP. Some of us are more prone to one than the other, and some of us are intensely susceptible to both. This can lead to a lot of confusion and pain both for us and our girlfriends, as we balance on the thin edge between one source of panic and the other. “Come closer, where are you? I miss you! Wait, no, that’s too close,back off! Uh-oh, where’d you go, come back! No, no, you’re smothering me, get away!”

Often, in a given relationship, one person becomes more identified with one need, and the other person with the other. This is the case with Elise and Susan. Elise always feels as if she wants more closeness, and Susan is constantly trying to get more space. “The funny thing is, in my past relationships, I was always the one who wanted more closeness,” Susan admits ruefully. “So I can understand the pain Elise is in. I just don’t know what to do about it. When she keeps calling and texting, I just start to turn off to her.”

“I grew up with a very abusive mother,” Elise reflects. “It’s a struggle for me to believe that I’m worthy of being loved. When Susan is too busy to talk to me, I can’t help but take it personally.”

“And my mother was invasive,” Susan explains. “Everything was always all about her. There was no room at all for me to have my own feelings or needs.”

It’s easy for Elise and Susan to understand where their PAP and PEP come from. “We get that these are feelings with very deep roots,” they both say. “But what do we do about them?”

Jerri and Lou are also relieved to hear about PAP and PEP. “That explains a lot,” Jerri agrees. And Lou adds, “I guess I always end up with women whose PAP triggers my PEP. But how can we get through this?”

Ruth L. Schwartz, Ph.D. is the Cofounder of Conscious Girlfriend: Lesbians & Queer Women Creating True Love. Visit www.consciousgirlfriend.com/telesummit.html to register for
the upcoming Conscious Love telesummit, and hear 8 hours of free interviews with 11 LGBTQI relationship experts from around the world!