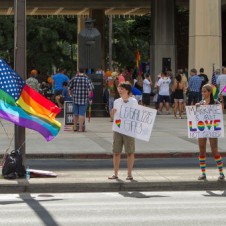 The Hawaii House of Representatives on Friday gave its final approval to a bill that would extend marriage rights to same-sex couples in the Aloha State. The Hawaii House approved the bill two days after the chamber passed it on its second reading following five days of testimony from SB1 supporters and opponents. The state Senate on Oct. 30 overwhelmingly approved the measure.

“I commend the House of Representatives for taking this historic vote to move justice and equality forward,” Gov. Neil Abercrombie said. “After more than 50 hours of public testimony from thousands of testifiers on both sides of the issue, evaluating dozens of amendments and deliberating procedures through hours of floor debates, the House passed this significant bill, which directly creates a balance between marriage equality for same-sex couples and protect our First Amendment freedoms for religious organizations.”

Same-sex couples will be able to legally marry in Hawaii on Dec. 2 once Abercrombie signs SB1 into law.