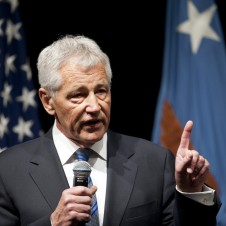 Defense Secretary Chuck Hagel is confirmed to make an appearance at an upcoming Pentagon event observing June as the month for Pride, which has been set for June 25, alongside Senior Adviser to President Valerie Jarrett.

Pentagon Press Secretary George Little confirmed in a statement provided via email to the Washington Blade that Hagel would participate in the event, making him the first defense secretary to take part in a Pentagon Pride celebration. A defense official said Hagel would provide opening remarks to the group in person.