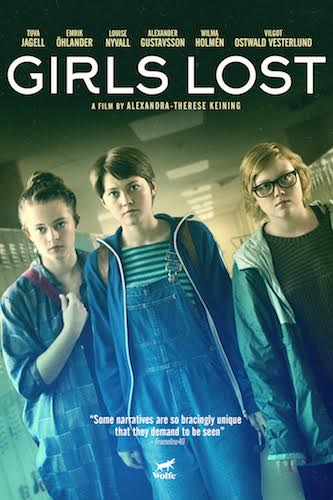 How would a girl’s life change, if she was a boy? What privileges would she have as a man that she wouldn’t as a woman? How would it affect her friendships? Her sexuality? Her identity? Girls Lost attempts to answer this question through a ‘modern fairytale,’ albeit more “Brothers Grimm” than Disney.

Girls Lost is a Swedish ‘coming of age’ film that breaks through all the cliches of the genre to tell a compelling story of gender, friendship and coming to terms with your true self.  Girls Lost is based on the novel Pojkarna by Jessica Schiefuerm and adapted by writer/director Alexandra-Therese Keining (Kiss Me). Using magical realism, the movie tells the story of three 14 year old girls, Kim, Momo and Bella. Kim is androgynous, Momo is sensitive and beautiful and Bella is bespectacled and still covered in baby fat. They are best friends who look out for each other. The three girls are tormented at school by a group of mean boys, which is a refreshing break from the American trope of ‘mean girls.’ The boys physically assault the girls, call them ugly, whores and all sorts of terrible names. Kim is told to get a thicker skin by a female gym coach who ignores their plight.
The girls, working together in Bella’s greenhouse, plant a mysterious seed that is thrown in among packets of rose and wisteria. The seed grows quickly into an ominous looking, vanilla scented black flower. The delicious smell tempts the girls into tasting the nectar that drips from its pods, and gives them the power to turn into boys overnight. They three girls change into boys and are granted entry into the teen boy patriarchy. For Belle and Momo, it’s all breathless excitement. But for Kim, the change reinforces her suspicions that she was born in the wrong body and leaves her with more questions than answers about her own sexuality. Director Alexandra-Therese Keining said, “I wanted to portray gender as a fluid notion, not an absolute, and explore ideas about how gender influences how we move through the world and how we are treated by others.”
I don’t want to spoil the twists and turns. Although Girls Lost is more of a slow simmer than a wild ride of twists and turns, viewers will still be surprised as the movie reaches its climax and conclusion.
Even without the compelling story, Girls Lost would be enjoyable for the soundtrack and beauty of the cinematography alone. The soundtrack is reminiscent of the Netflix hit Stranger Things. The young cast, who are played by actual child actors, instead of the sexy 20-somethings employed to play teens in American movies, give performances so seamless it’s easy to forget that plants don’t actually have the power to turn young women into boys.
Society has a long way to go in terms of accepting the transgender community. And watching this movie is a good place to start; for both queer and straight people alike. Watch Girls Lost on Wolfe Video today!