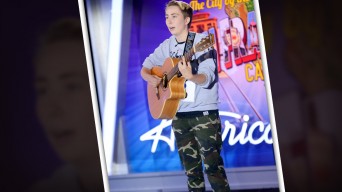 MK Nobilette was named to the Top 10 female performers on “American Idol” tonight as the show kicked off its three-night Rush Week feature. Nobilette, a 20-year-old street singer and guitarist from San Francisco, is the first openly gay contestant to be featured on the show.

Nobilette gave an emotional performance of John Legend’s “All of Me” and gained unanimous praise from the “American Idol” judges.

Jennifer Lopez got a little misty after the performance as the audience applause made it difficult for the judges to immediately provide feedback. “Getting up there can be so daunting but at the end of the day it’s just about making people feel something … It’s so easy to pick the big singers, but then somebody comes and you realize that’s not what it’s about.”

“It was the perfect song choice, it really was. There’s a transparency in your vulnerability and your humanness,” Keith Urban told her, adding, “That was a really beautiful performance.”

“You belong here,” Connick told her after commenting that it was the first time he’d seen her perform without a “defeatist attitude.”