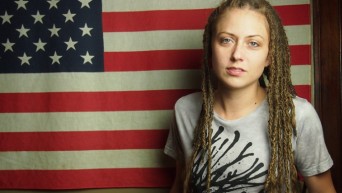 Whether you’re a fan of reality TV or a fashion savvy sappho, chances are you know designer Alicia Hardesty. Hardesty was a featured designer on season 10 of “Project Runway” and is the founder of Original Tomboy, a clothing line inspired by Hardesty’s Kentucky roots.

Prior to the “Project Runway” stint, Hardesty designed menswear for big companies like Aeropostale, and small labels like Black Hearts Brigade, but has since moved on to establish her modern-day Huck Finn-influenced Original Tomboy line.

I was able to get Hardesty to step aware from the sewing machines and scissors long enough to take on a handful of questions in this weeks’ Fast 5.

Ralph Lauren has been a big professional influence for me.

On the beach with a view of the mountains.

4. What’s the last movie you went to the theater to see?

5. If they started offering free trips to the moon tomorrow, would you sign up to go?

I would seriously consider it, but I wouldn’t sign up right away.