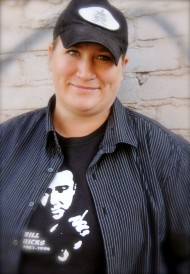 Move over Candace Gingrich; there’s another “Accidental Activist” in town and this one also happens to be raucously funny. Bonus!

Say hello to Buffalo-based comedian Kristen Becker. Becker has been plying her comedy trade for over a decade, entertaining audiences across North America and receiving accolades for her intelligent, personal and political brand of humor.

Artvoice, Buffalo’s news weekly, named Becker Best Stand-Up Comic four years running and if they have a category for Most Politically Outspoken Stand-Up Comic, Becker may win that one, too, as she recently found herself barnstorming across her co-home state of Louisiana advocating for non-discrimination legislation which was being considered by the Pelican State’s legislature.

When Becker posted an open letter to Louisiana on her blog, bemoaning the state’s anti-gay laws and explaining how those outdated policies prevented her from ever permanently returning to the place she loved so dearly, she caught the attention of Louisiana LGBT rights activists. Before she knew it, the comedy club general manager had joined their cause, lending both her comedic talents and activist energies to their efforts.

I caught up with Becker for our Fast 5 as she set off for Provincetown, Massachusetts, where she’ll be performing every Tuesday night this summer at the Post Office Cabaret. Becker is taking her Buffalo-honed “stand-up sketch and other oddities” variety show to the LGBT-mecca beach town from June 24 through August 26 (with special Wednesday performances on July 16 and July 23).

1. Tell us one thing about you that most people probably don’t know, but you’re willing to share.

I am an initiated member of Zeta Tau Alpha sorority at Centenary College, Shreveport, Louisiana. I was the consummate southern college girl. Until they began to realize I might be a homosexual, and they asked me to disaffiliate myself. I still know the secret handshake, so I think I won. Yes, there is ACTUALLY a secret handshake.

2. If you could wake up tomorrow with one talent or skill you don’t presently have, what would you want that to be?

To play an instrument — piano, banjo, sax — any or all.

Getting asked to perform in Provincetown for the 2014 season. Catch my variety Hour ‘Tuesdays at Ten at the Post Office Cabaret. There will be a show every Tuesday at 10pm.

Depends on the day/person. There are some people I really enjoy falling into a chat with, in real life, not via text.

“Amish Mafia.” There is something about it that is dramatic, without any actual REAL drama. So many shows are filled with beheadings and death and rape and at times it is sensory overload for me. I find that lately the level of violence I can/want to tolerate is ” that guy pissed us off, lets go steal his horse.”