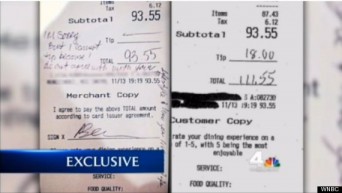 Side by side images of the receipts.

The story of a gay waitress who was reportedly denied a tip and received a homophobic note on a restaurant receipt took an even stranger turn when the family implicated in the incident came forward to deny the whole thing. Dayna Morales, a Marine and server at Gallop Asian Bistro in Bridgewater, N.J., made headlines earlier this month when she posted an anti-gay receipt note on Facebook. In her post, she claimed a family came into the restaurant, called her by the name “Dan” and neglected to leave a tip. She claimed she found a note on their bill, reading, “I’m sorry but I cannot tip because I don’t agree with your lifestyle & how you live your life.”

A husband and wife, who wish to remain anonymous, spoke with New York’s WNBC and showed the network a copy of their $93.55 receipt, printed on the same day and the same minute as the one Morales photographed for Facebook. However, instead of a $0 tip, there was an $18 tip written on the customer copy presented by the family. To verify this further, the two also showed their Visa bill to prove they were charged a total of $111.55.